SNPrank[1] is an eigenvector centrality algorithm that ranks the importance of single nucleotide polymorphisms (SNPs) in a genetic association interaction network (GAIN) [2]. Each SNP is ranked according to its overall contribution to the phenotype, including its main effect and second- and higher-order gene-gene interactions. SNPrank is open source software and available as a command-line tool in several language implementations.

For access to command-line implementations of SNPrank (Matlab, Python, Java, as well as CPU and GPU versions), see our organization page at github.

GAIN can be combined with SNPrank for a powerful analysis engine. We have a tutorial describing the steps of the analysis as well as the dependencies required. 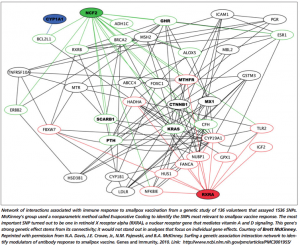